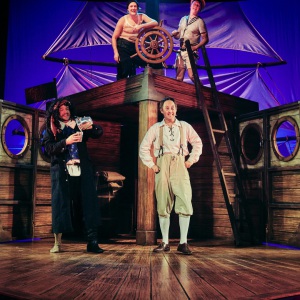 Fi Russell’s design is particularly impressive. The versatile set sees the stage transform from the Admiral Benbow bar to deck of the Jolly Todger to Ben Gunn’s island shack. It all makes for a nugget of lovingly crafted seasonal silliness – a real treasure.

Fi Russell’s superbly simple but versatile set becomes pub, ship and island with a swift fold, tuck or slide while silhouettes and Looola Nicholson’s puppets are used to great effect. 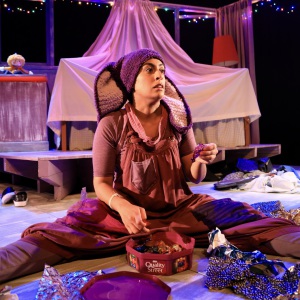 The simplicity of the set was truly innovative and beautiful. The minimalist set and lighting deny the theatre completely of all its frills and superficiality. It is the perfect rendition of the idyllic Christmas home, allowing the audience to focus on the dynamic acting and the important, universal themes. In its simplicity, it completely trusts its audience to use their imaginations, play​-act the story with the cast, and join them on the magical and enchanting journey of Alice and Rabbit.

The audience was left enthralled by their quick costume changes 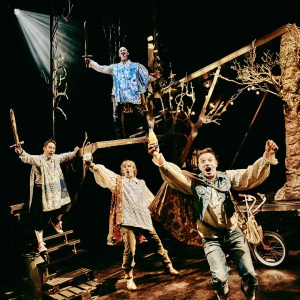 Ti Green’s set is a treehouse den that most little boys could only dream of, and Fi Russell’s costumes mix frilled 17th-century shirts with jeans and Converse. It’s all dress-up and make believe.

On-stage costume changes and scene shifting are done with military precision. You’re not just watching a play, you’re being shown what it takes to hold a production together.

The concept of childhood friends playing out the role of the Musketeers, supported by great costume ideas from Fi Russell involving capes that looked like they were swiped from mum’s curtains 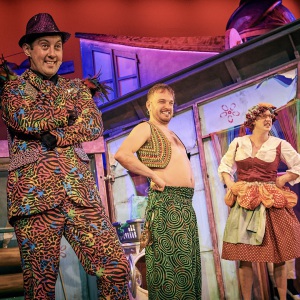 Pastiche panto it may be but the Fi Russell’s set is slick, shifting the action from palace to laundry, dungeon to street and testament to the carpentry skills of Spencer Rouse and Dante Villa and painter Jamie Andrews.

The staging, a clever multi-tasking design, makes good use of the Plymouth Athaneum space, taking us from launderette to palace in the blink of an eye. With well-judged use of props and lighting, you could be forgiven for thinking you are watching a regular panto, but Le Navet Bete’s Aladdin is far from ordinary.